March is Women’s History Month in America. It’s a good time to reflect not only on women’s contributions to American and world history, but also just how important women have been (and are) in shaping early childhood education throughout history. It’s a trend that continues to this day: in 2018, women accounted for 94 percent of America’s child care workers[11], and 98 percent of PreK and kindergarten teachers.[1]

Let’s look at some women who’ve contributed to early childhood education around the world.

Important Women in the History of Early Childhood Education

In America and around the world, the history of early childhood education has been shaped by the remarkable courage and perseverance of women and girls who fought for their rights—and the rights of all.

Malala Yousafzi is known today as the youngest person ever to receive a Nobel Peace Prize, and she is a global advocate for educational rights for girls. But her young story nearly ended in tragedy.

Yousafzi was born in Pakistan in 1997 and attended a girl’s school. After the Taliban enforced a harsh rule in her Swat Valley, shutting down girls’ schools, Yousafzi spoke out publicly for girls to have the right to attend school. She was targeted by an assassin and shot in the head. Yousafzi survived, though, and made a new home in the United Kingdom where she continued to speak even louder. She was awarded the Nobel Peace Prize in 2014 and, along with her father, established the Malala Fund, a charity devoted to giving opportunities for girls across the world.

To this day, Yousafzi is an outspoken advocate for the right of girls everywhere to have access to education.[2]

Anne Sullivan is most famous as the “Miracle Worker,” the teacher who taught Helen Keller, a woman who was blind and deaf, to communicate. Sullivan herself overcame harsh circumstances in her early life. She was born into poverty. She contracted an eye disease when she was 5 years old. Her mother and three siblings died early in her life, and her abusive father abandoned the family. Sullivan eventually found her way to the Perkins School for the Blind, where she graduated as a valedictorian.

Helen Keller’s family hired Sullivan to teach Keller. Sullivan began by finger-spelling words on Keller’s hand. Soon, Keller learned more words and math, as well as how to read Braille and communicate with sign language.[10] As news spread of the “miracle,” Keller met with world dignitaries like Mark Twain, Thomas Edison, and Alexander Graham Bell. She became a symbol of overcoming steep odds, eventually being awarded both an Oscar and the Presidential Medal of Freedom.[3]

Together, Anne Sullivan and Helen Keller affected the way society viewed and valued education for children born with different abilities.

Ducksters has an online, child-friendly biography of Helen Keller’s life, along with her work with Anne Sullivan. 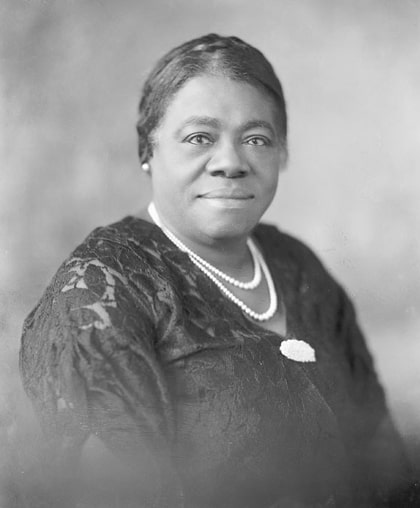 Mary McLeod Bethune was born to former slaves not long after the Civil War. In 1894, she graduated from a North Carolina boarding school and went on to teach school in South Carolina. Bethune was active in many civil rights causes, including leading voter registration drives. She became president of the National Association of Colored Women’s Clubs and founded the National Council of Negro Women.

She also founded the Bethune-Cookman College in 1929, and she worked for President Franklin Roosevelt from 1936 to 1944.

Bethune eventually became vice president of the National Association for the Advancement of Colored People.[4]

“Go, get education” was Savitribai Phule’s motto for women and people from lower castes in India. Phule was born in early 19th century India, and the caste system dominated her daily life. She overcame tremendous adversity to become India’s first-ever female teacher, introducing educational methods that are familiar to this day (like the parent-teacher conference). Phule was taunted and assaulted by people who were angry with her attempts as a teacher. Her reply was “Your efforts inspire me to continue my work. May God bless you.”

Along with her husband, Phule played a pivotal role in reforming Indian society, guided by her belief that education for all was the best way to address social inequalities.[5] Watch more about her with this video hosted on Youtube:

The State Historical Society of Missouri’s site hosts a biography of Susan Blow.

Margaret Bancroft’s influence and contributions to education made a difference in countless lives. She opened the first private school for children with developmental delays.

At that time, children with developmental disabilities were not provided an education. But Bancroft set about to change that. She believed special schools, materials, and well-trained teachers could help children with disabilities learn in schools, instead of being sent to institutions.[8]

Today, Bancroft is considered a pioneer in special education. The Philadelphia native left Pennsylvania to start her school in New Jersey specifically for children with developmental disabilities.

Bancroft focused on the well-being and growth of her students. This led to a change in the way children with special needs were cared for and educated in America and, ultimately, to the formation of the field of special education.[9]