Waterford Gets Best Results for Students in State Intervention Program 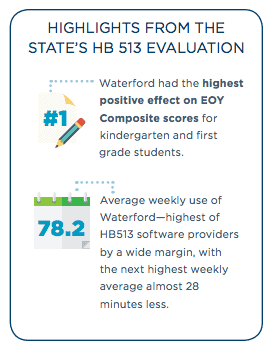 To evaluate the effectiveness of their early intervention program, the state commissions annual reports from an independent evaluator. Waterford “had the highest positive effect on student learning” in kindergarten and first grade, according to the report and state documents.

Students and teachers were also more likely to use their Waterford curriculum, showing better adoption and successful adherence than with other programs. Waterford “had the highest average weekly use (78.2 minutes) by a wide margin,” according to the report. The next highest weekly average was almost 28 minutes less.

At Park Elementary School, a Title I school in Spanish Fork, Utah, where 73 percent of students are under-resourced financially, kindergarten teacher Cheryl Leifson calls Waterford “amazing” because of its ability to individualize her classroom instruction.

“I would absolutely recommend other schools use Waterford…” she says. “If you have more than 20 five-year-olds (in your classroom), when are you ever going to be able to provide them with a 15-minute slot of time where they get to work one-on-one on their level? Without Waterford, it just doesn’t happen.”

“I feel using Waterford for our primary grade intervention is where we get the biggest bang for our buck,” Kay says. “Putting those students on Waterford 15 minutes a day and letting them progress at their own rate—we’ve seen much bigger jumps than we would have without it.”